There are no more robotics courses at the technikum.

The courses presented on this page were given between the years 2016 and 2017 at high schools in the regional district as well as on education centers for youths. Since the sudden death of eribert Müller, they are canceled. Most likely, they will never take place in the same way. This page exists only in order to show what has happened at the technikum in former days.

Educational training at a museal site

Programming as a basic competence in the age of information is a common goal of government and industry. The popular IT companies of the web 2.0 demonstrate: Programmers could be the new pop stars. At technikum29, we join this movement by inspiring youths to build robots. It's fun and supports creativity.

We offer two courses: An introductory course which is mainly based on graphical programming. In the advanced course, students learn to program with a programming language at the Mindstorms Education EV3 system.

We supervise up to 10 students per course, each with an own robot which is provided. Our workshops are for students in the age of 11 up to 13 years. We also collaborate with adult evening classes (Volkshochschule in Germany) to offer similar courses for unskilled adults.

Our robotics course promotes graphical programming with the LEGO Mindstorms technology. We build robots which can navigate autonomously. In our course, students learn: 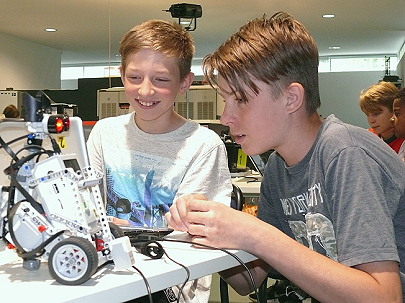 Astonishing success of former participants in the robotic workshop:: 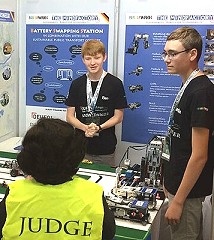 Three years ago, the "foundation" was laid here in the technikum29 . The kids, now 9th graders, discovered their enthusiasm for robotics. Ben Huber (15) and Martin Vekony (15) won the 2nd prize in the world finale of the World Robot Olympiad (WRO) in Costa Rica with their robot-supported battery replacement station.
A total of over 59 nations competed in several Rounds from 10.-12. November 2017 the critical eyes of international jurors. It was "The Mindfactory 2.0" in the Junior Open category in Costa Rica by 33 international teams to prevail at the top and thus came on the winner's podium. More than 1,296 teams started participating in the Open Junior category worldwide.
For more details see: THE MINDFACTORY 2.0.