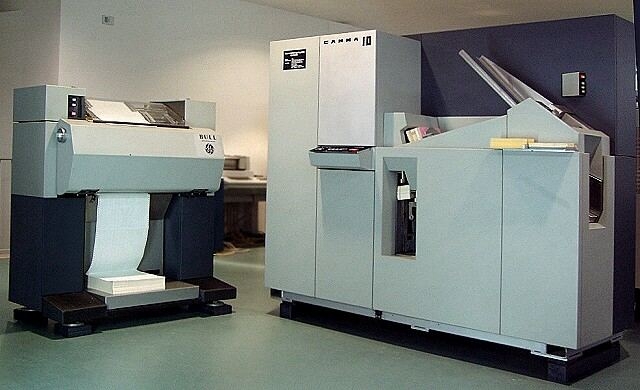 In 1963 BULL (General Electric) presented the BULL GAMMA 10 (G10) which was intended for commercial purpose and puchcard computing. It was the direct successor of the Tabulating Machine. Compared to the really big mainframes, the G10 was intended to be set up in a 20 square meter room, without air conditioning. The maximum power input was 2.5 kW.
The standard equipment contains a CPU with panel, a punchcard reader/puncher unit and a barrel printer. The RAM consists of a 1kb core memory which could be extended up to 4kb capacity. There are 59 different opcodes to program the CPU.
The cycle time from the core memory is 7 micro seconds. The calculator is capable of reading and punching 300 cards per minute. Five punchcards per second, that is an amazing speed – therefore the punching unit is generously built. The printer can only print up to 300 lines per minute. Compared to our Univac 9400 this is quite slow – the Univac 9400 is capable of printing more than 1000 lines per minute.

The chassis is metallic bright and glossy. It is clearly arranged and therefore the machine is quite easy to maintain.
By now the whole mechanics are working again, which is the core part of the computer. After adjusting the temperature of the heated core memory and replacing some broken transistors, the program for duplication punch cards runs again, as well as some mathematical programs. 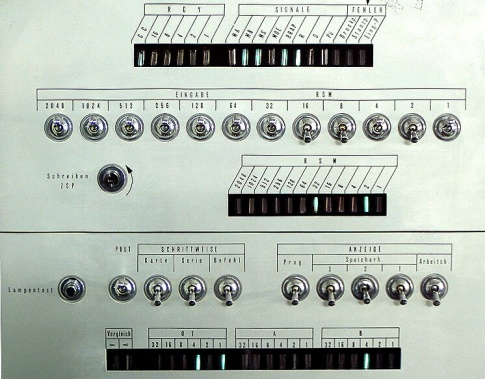 The control panel could be used for monitoring running programs, as well as for early "test driven development" for programmers.
The picture shows details of the programmer's part of the control panel. These buttons and switches are intended for debugging a program step-by-step and for reading out the contents of registers, the ALU and RAM, and, finally, for assembling and executing new computer instructions.
All output is driven by lime-green "DM 160" miniature tubes. 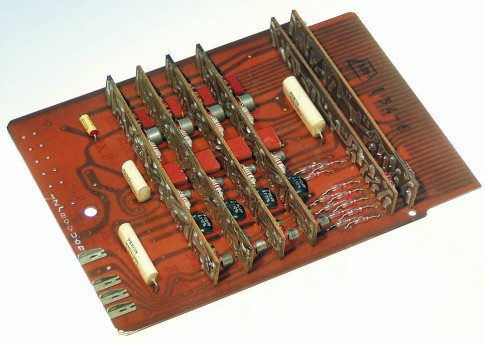 This is a picture of a typical GAMMA 10 board. On the mainboard, all conductor paths are aligned horizontally while on the small plug-in boards (flip-flops, amplifiers, etc.) they are mostly vertically oriented. Almost all transistors are made of germanium.
The slow non-time-critical logic (like card controlling) is performed by 573 relays. Building up such an amount of wear parts is quiete brave.
Summing up, there were about 570 boards like this one in the GAMMA 10 (without counting the printer interface). The GAMMA 10 was sold as a quite cheap electronic data processing system. We have gotten an original list of prices for this device from 1968/69, when this model was already out-of-date and hence very cheap:
CPU with 4kB core memory: 267.000,- DM (about 133.000,- Euro or Dollar)
Printer: 105.000,- DM (about 50.000,- Euro, Dollar)

While our GAMMA 10 is in a very good shape, we cannot use the printer any more, since all electronics are missing.
But we were very lucky: An original printer has been donated to the museum by the F.E.B. (Federation des Equipes Bull) in France. Although the enclosure is missing completely as well as some other parts, we were able to rebuild a fully functional printer basied on this devices together with the parts already in the collection. The result is remarkable (see below).

BULL I 50: Before a printer fragment and afterwards fully functional

Some interesting technical data: The computer contains more than 4,000 discrete transistors, about 10,000 diodes and more then 2,500 test points which aide the service technician. Tracking down errors by swapping boards was not possible since the logical functions are spread over the whole chassis and are not concentrated on single cards. A typical errorneous function had to be traced from card 17, which is connected to card 95, which is, in turn, connected to card 43 and card 293 which contains a flipflop which is necessary to implement this particular basic function. Without detailed schematics and cycle diagrams it would be impossible to repair this machine.