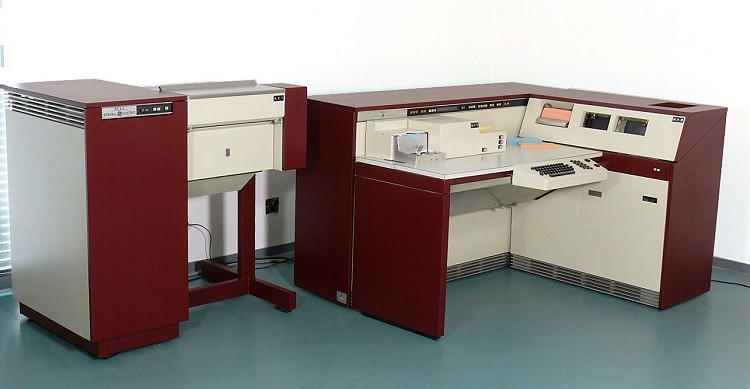 On the left the printer I41 is visible, in the background the CPU (2m wide!) and on the right the paper tape puncher can be seen. On top of the desk is a punch card reader with an alphanumeric keyboard in front of it.

We are since 2012 the proud owners of a new BULL computer system: A BULL Gamma 55 (also known as GE-55 after the merge with General-Electric). The system now in the collection was stored in Switzerland with all accompanying documentation, punched cards etc. for 26 years.
It was developed in 1966 by BULL in France and hit the market in 1967. It was aimed at small and middle sized companies that were too small as customers for other, larger computer systems.

This computer demonstrates the tremendous advances of computer technology in the 1960s. While all instructions on the (larger) Gamma 10 are implemented with a lot of active circuitry stepping through many cycles, this is done in the Gamma 55 by means of a rather large read-only-memory. This is an implementation of a microprogram which reduces the necessary hardware significantly, making the machine cheaper and more reliable.
The basic implementation of the machines makes heavy use of mechanical parts but at least the card reader is an optical device. 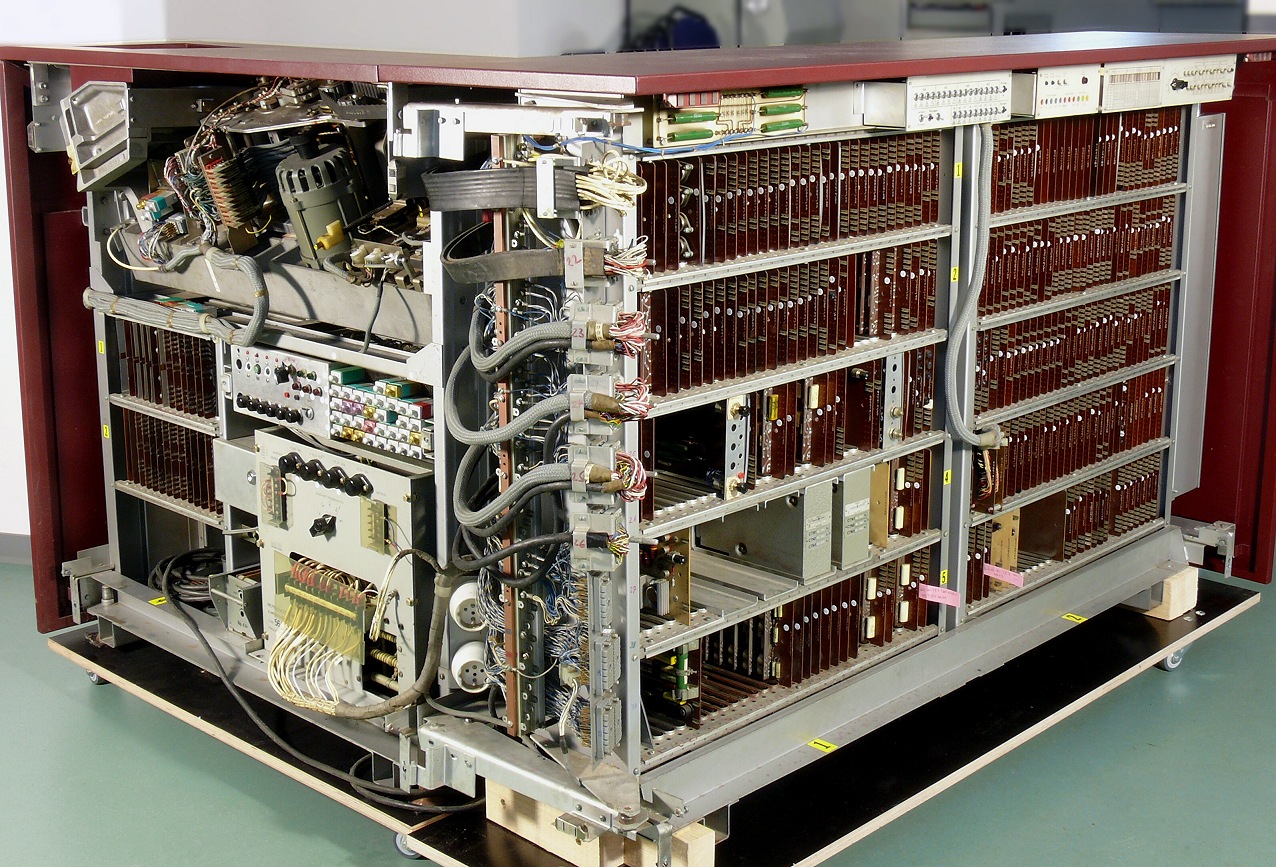 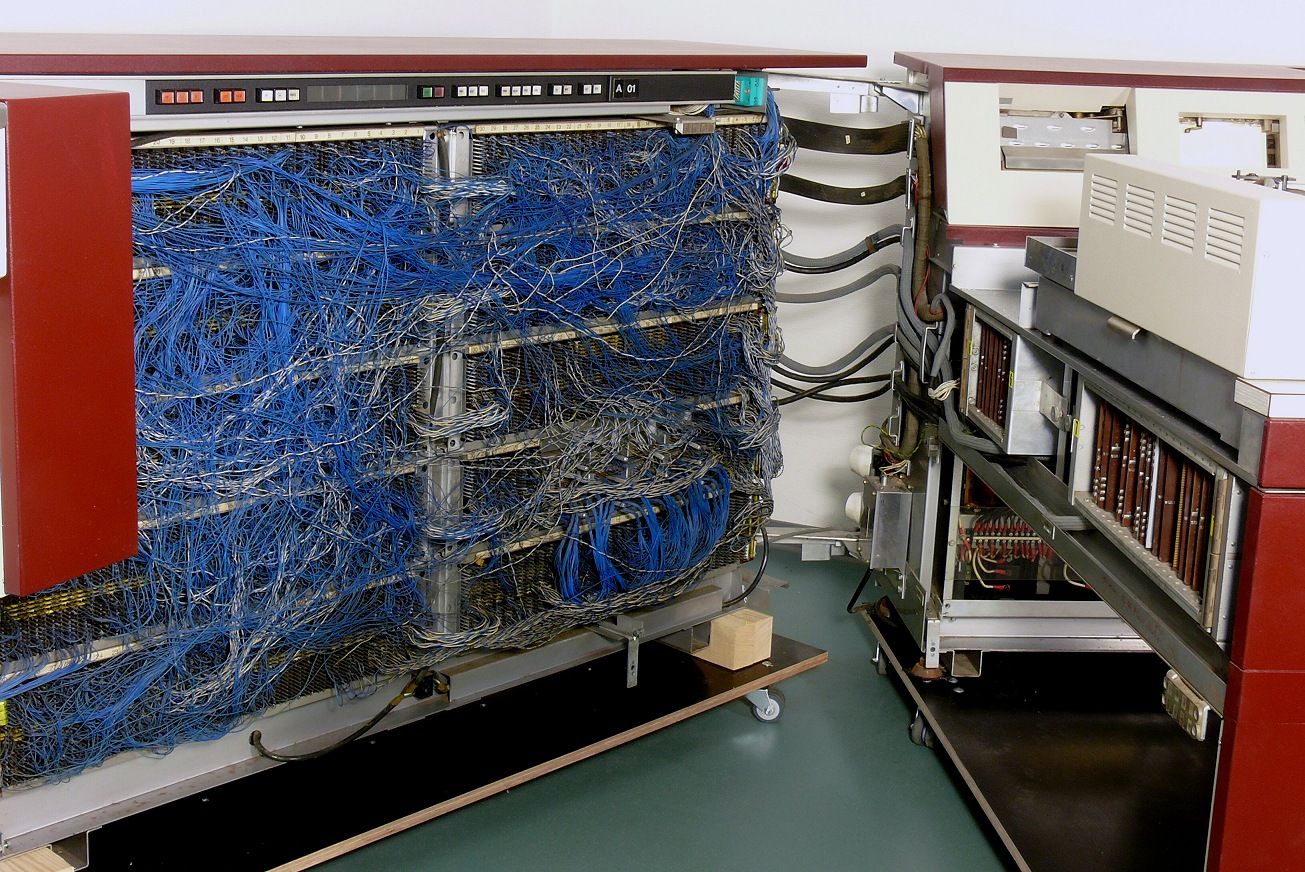 Our machine can be programmed in machine language or some kind of a mini-COBOL (Common Business Oriented Language). The compiler is loaded via punched cards. To start a program a Supervisor that is loaded by punched cards is necessary.
The system was advertised with 2.5 kB, 5 kB or 10 kB of main memory (core memory). Our machine has 5 kB of memory and it is really astonishing that a high level language like COBOL - even our mini-COBOL - is feasible with such a tiny amount of memory at all.

As an extension a memory drum was offered which also allowed the use of a mini-FORTRAN (FORmula TRANslator).
Although BULL was quite inventive concerning software their hardware was quite outdated. The boards used in this machine are the same as those in the earlier GAMMA 10 (based on Germanium transistors). At the same time other companies like UNIVAC or IBM already employed integrated circuits (DTL, Diode-Transistor-Logic) for their machines.


September 2013: Success! The machine is up and running!
After a substantial amount of time spent for debugging, the machine is now fully operational again. More the 30 (!!) defective transistors and diodes had to be traced down and replaced to achieve this. These parts failed silently during the 33 years in storage. We can now proudly state that this is the only surviving Gamma 55 on earth which is still running. If you are interested in details concerning the architecture and programming of the machine, have a look here (in German only): BULL Gamma 55 manuals 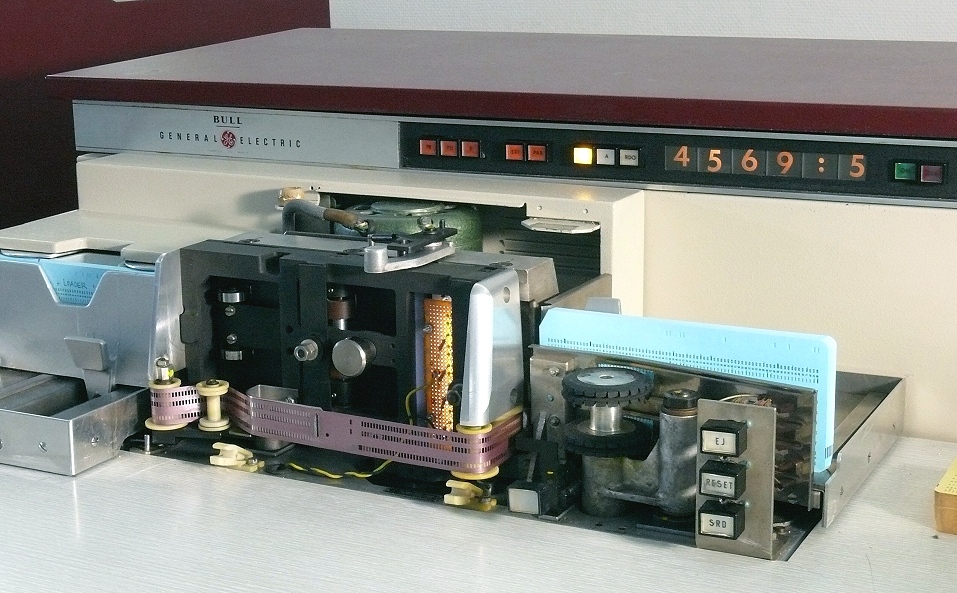 The card reader of the GE55 can be seen on the left of the pictures (without its cover. It is interesting to see that Bull solved every problem for which as (practical) mechanical solution exists in a mechanical way (as compared to our times where microcontrollers are abundant even in applications which might be implemented more easily with a mechanical approach). The card is coupled to a punched tape which generates the clock signal for reading the card's columns. Although this part can wear out easily, it is nevertheless an ingenious solution.
Also visible is the projection display: 10 digits and two additional symbols are displayed by an array of incandescent lamps with associated lenses. This is the main way of communicating with the machine like today's video terminals. The picture below shows the read-only-memory containing 1024 words. A very heavy contraption but very maintainable. (Both pictures can be enlarged by clicking on them.) 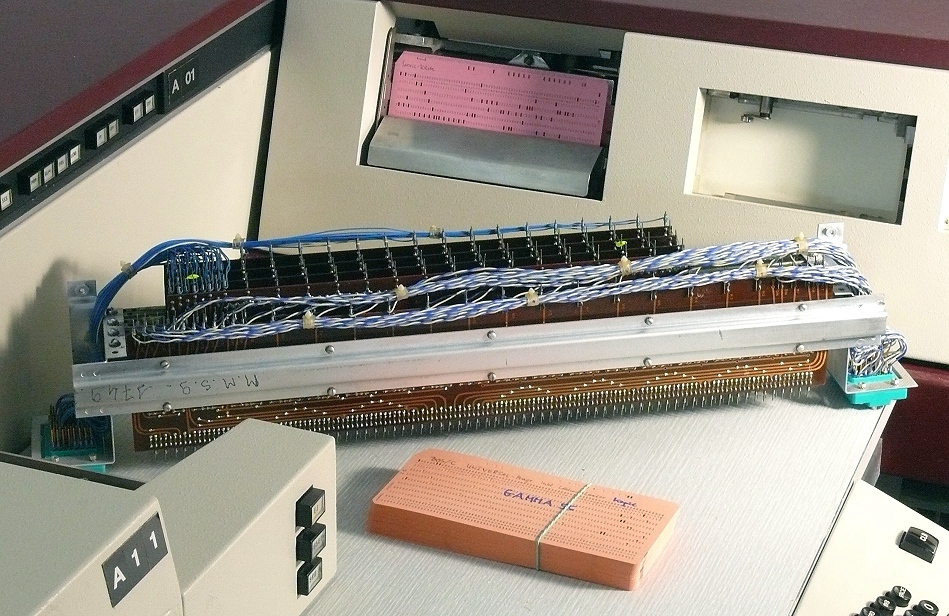 Contemporary document: In the following you find some quotations from the system description published in 1967/1968:


"After intensive market research, BULL GENERAL ELECTRIC developed a versatile computer system: Its internal structure resembles that of modern computers. Furthermore it is a data processing system that allows direct input via keyboard. It is a real data processing system because it can grow with your needs and its memory capacity (internal as well as external) can be extended.
Construction: The central processing unit (CPU) of the GE-55 supports four channels; three of which are normal speed channels for slow input/output devices and one high speed channel used by external memory units or a fast line printer...
....the cycle time is 7.9 us. Characters are represented by their respective ISO-code. The core memory is used as data and program memory. A since byte, comprised of 8 data bits and one parity bit, stores a single alphabetical character or up to two numerical digits...

Instructions are analyzed and executed under control of a read-only-memory with a capacity of 1024 word of 36 bits each... This memory contains micro programs for control, supervision and execution as well as arithmetic and character conversion tables.
Software: The programming system is mainly comprised of the following parts: Symbolic languages that facilitate the actual programming task and an assembler for translating assembler programs to machine language... "