Second-generation calculators did not have integrated circuits yet. This made it difficult to build efficient calculators, so programmable calculators of that species are technically especially interesting. Already in 1966, DIEHL put such a calculator on the market. The operating system is "booted" from a metallic paper tape and application programmes are stamped on paper tapes that can be read in again. Probably the Stone Age of programmable calculators! Such complete installations are very rare.

The Combitron is the first operating programmable desk calculator that was built and sold in Germany (1966-1968). The first Combitron's did not have an external interface, therefore it was not possible to save user-written programs on external storage. Programs could be printed as a Hex dump that could be used to reenter the program via the keyboard at a restart. 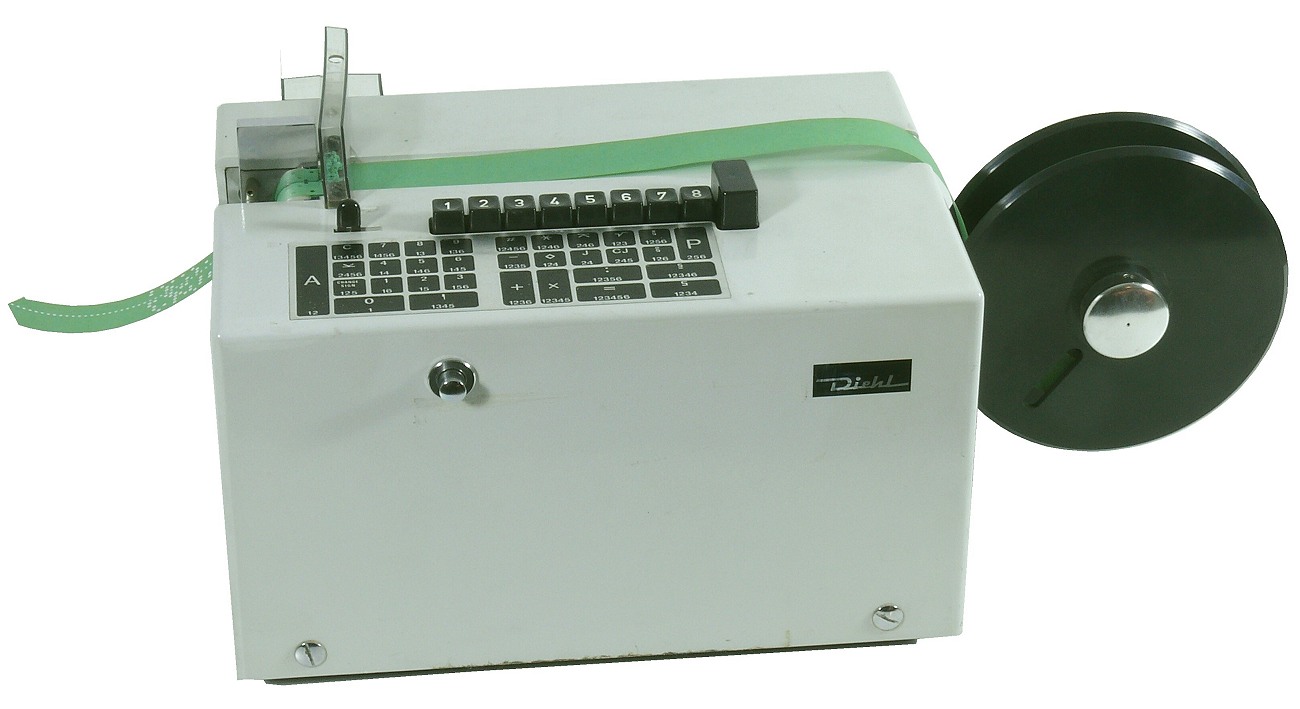 This kind of in and output was laborious even for the late 1960s. Diehl did recognize that and extended the computer in 1967 with an interface for a paper tape reader. They offered a paid conversion service: User-written programs could be sent in by post, a few days later one got a paper tape with the same information.
Under the pressure from the users, Diehl built a tape puncher (Diehl ELS) for manual (offline) operation, to avoid the snake mail conversion progress. 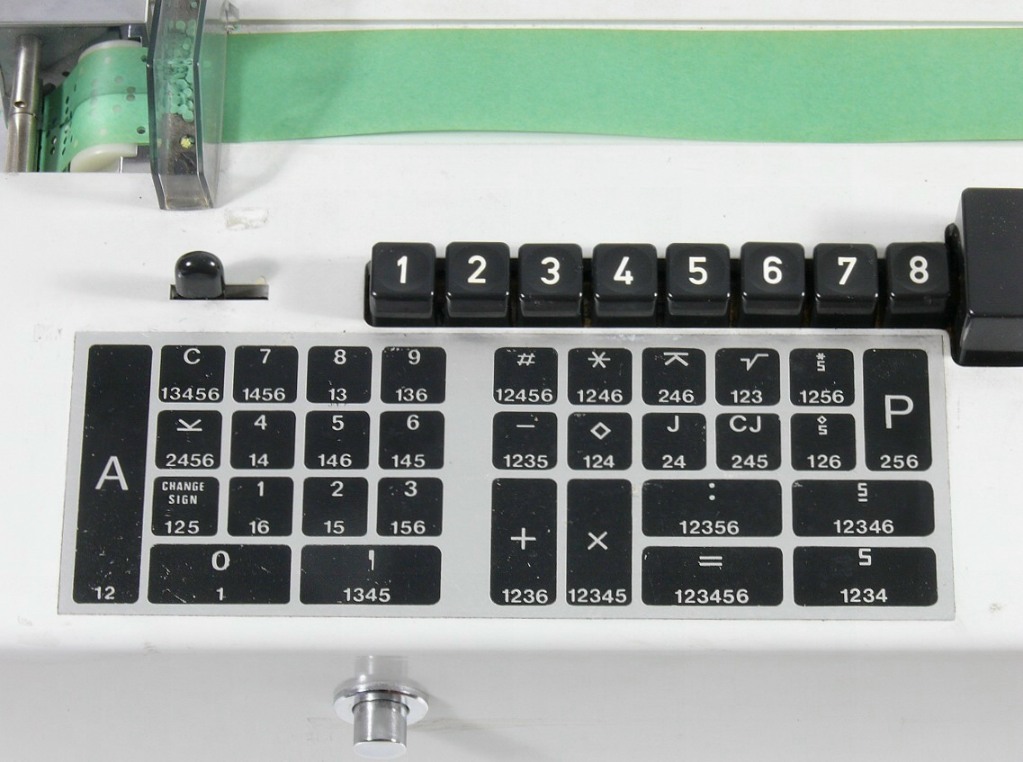 Looking at the DIEHL ELS keyboard, one can imagine how commands and numbers were transfered to paper tape codes. Anyway, this was only a workaround for the messed computer setup: Olivetti, the concurrency, had much more progressive devices. To compete, eventually the DIEHL Combitron was shipped with the puncher ELS 830, primarily designed only for Diehl internal usage. This final combitron puncher synchronously punches paper tapes while typing on the keyboard.

The Combitron S (1968-71) features additional 10 program memories, 10 memories for constants and two branch instructions opposite to the original version of the Combitron. The delay line memory serves as storage media (storage space: approx 1000 bits). The delay line memory is a volatile storage, i.e. after powering off the device the memory content is lost. With the paper tape reader "Dilector", programs could be read in when turing the device on again.

The legendary PROGRAMMA 101 by Olivetti.

The Olivetty Programma 101 was introduced onto the market in 1966, the same year as the DIEHL Combitron above. For the first time in EDP history, engineering offices were able to buy a "small" calculator on which you could quickly save own programs on magnetic cards. This machine was equipped with many mechanical parts and became a big seller. The device was very expensive, but the price of 14800 DM + fees (ca. 8000 Euro) paid for itself in saved manual calculating time.

The P 101 could also be called as the world's first personal computer.
In the center of the picture you can see the magnetic program card. Compared with the Combitron, storing programs is very comfortable with the P101.
The device is equipped with a delay line memory which is organized in 10 registers, each having 24 storage cells with 8 bit each. Summing up, there memory could save 240 byte. For comparison, that would not even suffice to store this paragraph of plain text!

Today, the computer is famous for his award-winning futuristic design. Putting it into operation required some work, since the plastic coils for winding the magnetic program cards deformed and the small builtin printer is problematic. Anyway, our P 101 is fully operational.

The WANG 320 is an outstanding machine in the collection. It was built in 1967 and is extremely rare nowadays. The system can be programmed using punched cards and features multiple keyboards, a sensational feature in its time.

In 1966/1967 the WANG 320 SE was a flagship calculator. Two of its features were truly sensational for its time: It could calculate logarithms and anti-logarithms quickly (in fact this took less time than the calcultion of a square root) and up to four keyboards could be connected to a single calculator unit; thus the machine was in fact a time sharing system. Further more the system could be programmed using punched cards – running programs were suspended for a short period of time to allow interactive users access to the machine. The 80 column punched cards could be prepared manually using a stencil. These features made the calculator a perfect match for schools and universities. While the slide rule was in use in most of these places, this machine allowed them to enter the field of computer science.
Clicking on the picture will show a larger and more detailed version. 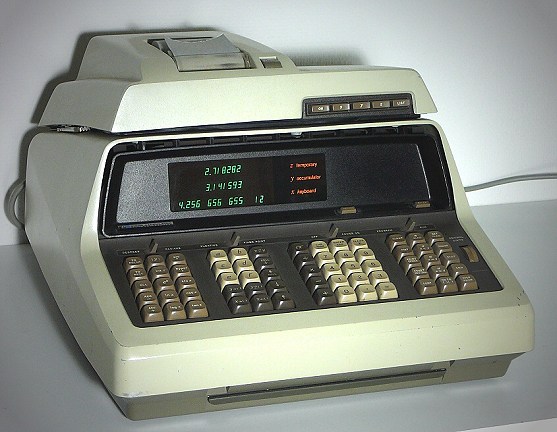 In 1968 the first desktop calculator made by HP hit the market and was a truly outstanding machine. All of its internal logic is implemented using discrete transistor logic without a single integrated circuit. The machine supports a wealth of mathematical and scientific functions and employs a magnetic core memory, so even after a power off the contents of memory (data and programs) are preserved. Magnetic cards serve as external storage media. The printer shown on top of the HP 9100 is an optional device. The heart of the display is a CRT on which the contents of three internal registers are displayed. The character generation is controlled by a wired ROM. This technological marvel indeed had its price – with a price of 23 000 DM for the basic version it was not affordable for individuals.
Only two years later WANG brought the WANG 700 to the market in direct competition to the HP 9100.

Closeup of the HP 9100 tube display

Read further details at the tabular overview of desk calculators