Punch cards are used since the beginnings of the 20th century as storage media. They are handy, can be labeled automatically or by hand, and can be sorted quickly. Therefore they were used until the late 1980s. Indeed they were mainly used in the 1960s, when EDP conquered the world. Today's folk is astonished at the size, the clearness and functionality of these machines. At technikum29 most of these archaic devices still work. 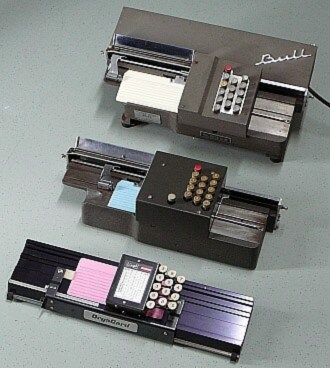 For punching cards only occasionally, the small bottom device was quite sufficient, e.g. for small companies. The device in the middle of the picture is a puncher from BULL and the topmost device is a so-called "magnetic puncher" that is equipped with solenoids that punch the holes. For even higher amounts of punching requirements, there were quite more expensive "motor-driven punchers".

A typical machinery consists of a card puncher which punches the information and data on the cards, a card collator which sorts the cards from different stacks (for instance adresses and bills), a sorter which sorts with specified loads and possibly a punch card interpreter that writes the punched information on a prescribed position on the punch card. 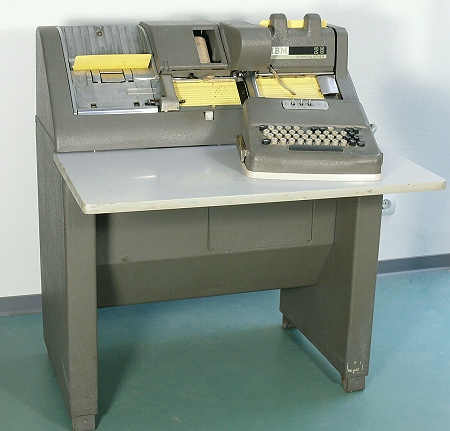 Beginning in 1949 IBM built two versions of this card punch: The IBM 024 which could just punch cards and the IBM 026 which could additionally print the data being punched on the top of the card in human-readable form, so the IBM 026 was actually a printing card punch. The printer is of ingenious design: A very compact wire printer only a couple of cubic inches in size, which is driven by the punch mechanism.
This is a typical example for the art of engineering that was common at IBM at that time: Developing simple, yet powerful solutions. Due to this approach, IBM filed (and still does) a vast amount of patent applications. The control system of the card punch only contains 10 relays featuring a lot of contact sets and 9 vacuum tubes.
This card punch was so successful that it was built unmodified for 20 years and was sold world wide - an exceptional record in an area like electronic data processing. 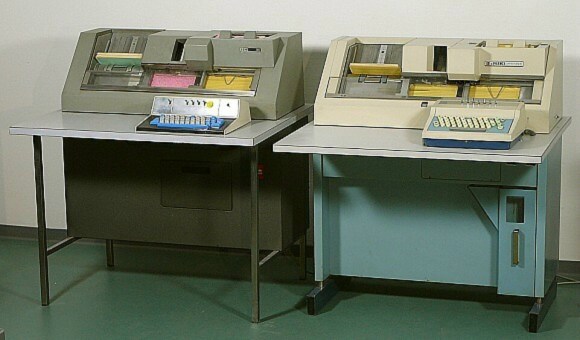 On the left hand in the picture there is the legendary IBM 029 (build since 1964), on the right hand the JUKI puncher (made in Japan). The JUKI puncher is not accidentally looking like the IBM: The type 129 card punch was introduced by IBM in 1971. It is capable of storing the contents of a whole card prior to punching it, thus making corrections possible. Therefore IBM selled the license of the 029 to reproduce the machine. In 1971, the IBM 029 costed about 15.500 DM. 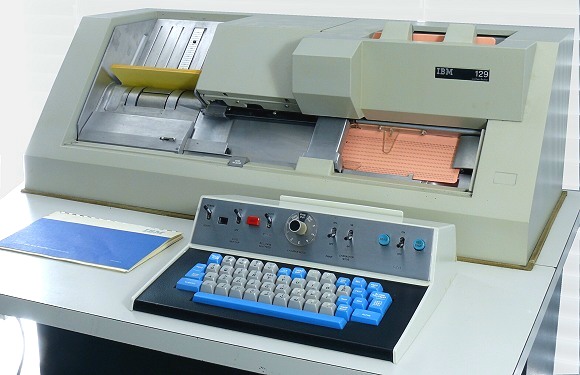 IBM's answer to the electronic card punch UNIVAC 1710 was its most sophisticated and last member of its venerable family of card punched, the model 129. Every usable modern technology was incorporated in this device: Data and punch programs were stored in a FET-based memory, early seven-segment LED displays were used to diplay the current column, the card transport employed a stepper motor. A very complex SLT-based control logic implements a wide variety of features: Verification of punched cards, printing the data stored on a card on its edge, storing up to six customized card formats etc.
The IBM 129 is a rather rare find since the market for card punches was already saturated in the early 1970s. In addition to this the decline of punch card equipment was already forseeable.
Our machine has a serial line interface as an add-on which we are currently repairing. 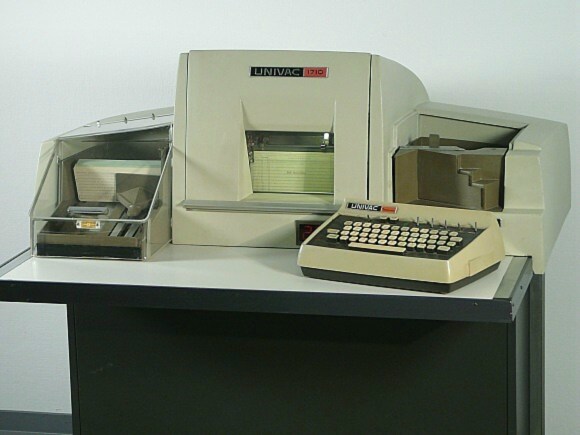 The Univac 1710 VIP was released at the same time like the UNIVAC 9400 mainframe in the year 1969. This device is very fast and versatile and works mostly electronically. Most likely, Univac wanted to trump IBM with this trendsetting device. The device's internals are very elaborate, but offer many advantages, compared to usual apperatures at that time:
It featured a core memory with 16 x 80 x 2 cells for both data and programs. It could handle two programs and one data storage. Programming was performed automatically once program cards have been inserted, and programs could be changed at the touch of a key. The device furthermore featured program-controlled printing during punching. Keypunching errors were electronically corrected, since cards were punched only after all entries were in storage. Verifying and correction comprised a one-pass operation. Verified cards were uniquely notched while error cards were automatically ejected to a separate stacker.
The device also features a large illuminated digital display that indicates which program is in control, furthermore the device could be used for subsequent card labeling. However, the device had always mechanical problems: The type wheel print was of bad quality and the card feeding could easily stop working when the adjustment wasn't perfectly fitting. 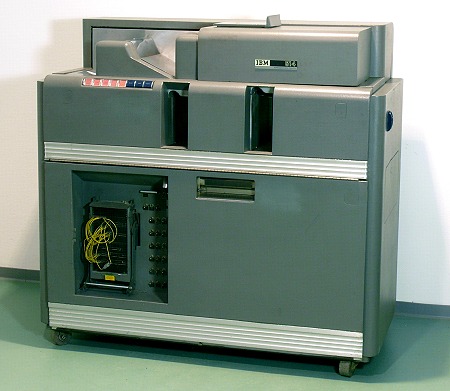 New in December 2013: Huge and incredibly heavy - an IBM card doubler from the 1950s. This grand machine's purpose was just to copy punched cards or to 'double' them. Due to the stress of handling, punched cards had to be copied regularly.
Of course, there are some additional functions implemented, although there is no function to print plaintext on the card, which would have been a nice feature, but this is where the IBM 548 translator comes into play. A more detailed description will follow soon. 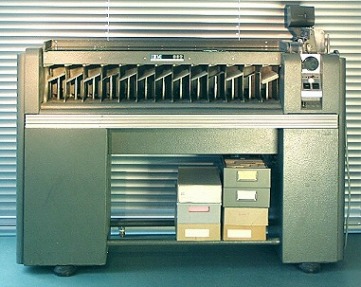 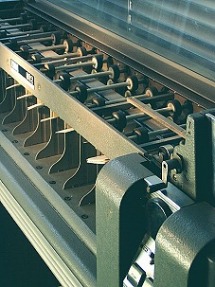 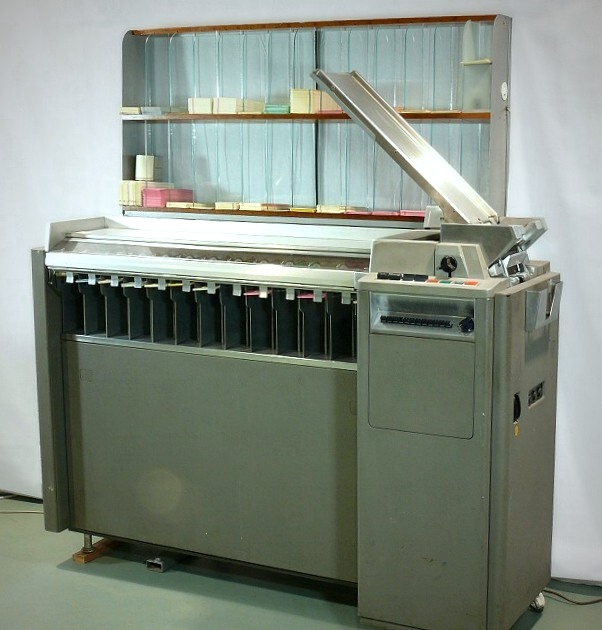 IBM 083 sorter
Compared to the IBM 082 the sorting mechanics were greatly improved. The machine can sort 1000 cards per minute. Much more than 16 cards per second are not possible, due to the mechanic's inertia. This type was built since 1958.
The function of the punch card sorter 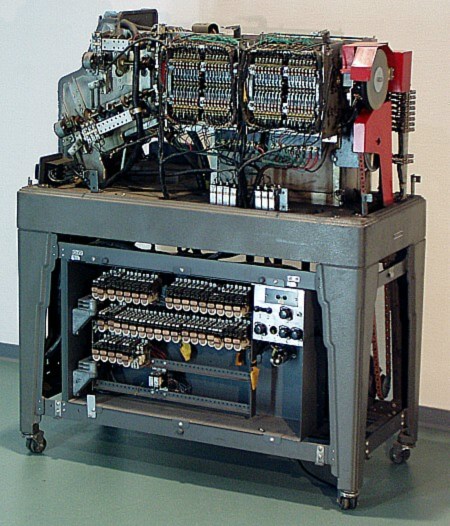 The picture above shows the back of a collator, year of manufacture 1959. The collector reads 480 cards per minute. It is capable of changing the order of the cards, looking for copies (and seperating them out) or comparing two stacks and finding out the differences. Compared to today's database storages this card collator is a kind of mechanical database query language interpreter.
The electronics comprises of relays and camshafts which control switches. Early engineers had to use oilcans for the bearing's maintenance as often as a checking device.
The programs could be changed by replacing the programing field.
The function of the punch card collator 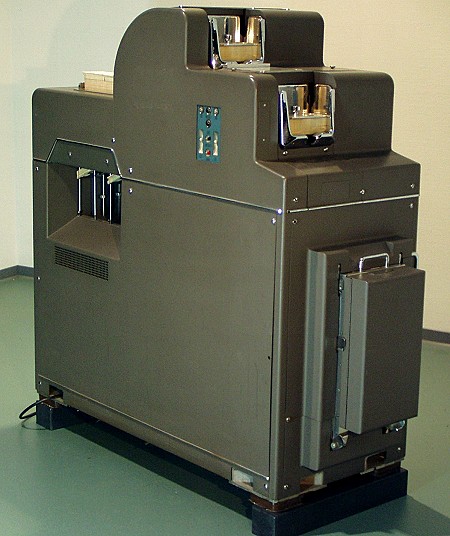 This very big device features very much chrome and almost 1000 relays, assembled to allow developers to implement varoius mixing algorithms with wired panels. Thus collating and sorting could be performed in only one working cycle. Depending on the task, the device could process about 250 - 500 cards per minute. 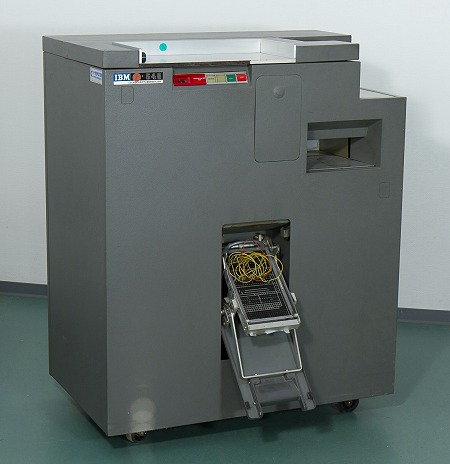 A huge punch card interpreter made by IBM. This machine can label 60 cards per minute in 60 cols and two rows, according to the settings which you can set. 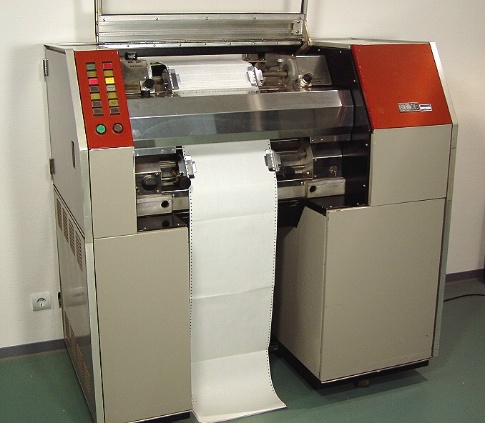 Just standing in front of this behemoth is an impressive experience. The overall weight of this mechanical wonder amounts to 635 kg and is sturdy enough to print a next to uncountable number of pages without any major defects. The series 5 printer was developed in the USA in 1963/64 and was used by many computer manufacturers (as a matter of fact, even ZUSE used this printer for the Z-23 - other examples include the Electrologica X8 from the Netherlands etc.). Being able to print 1250 lines per minute it was the fastest printer until 1965.
Our ANELEX printer has been repaired and can now be controlled by a microcontroller which in turn can be connected to a Laptop or the like. This is a nice example of a symbiosis of old and modern computing technology.